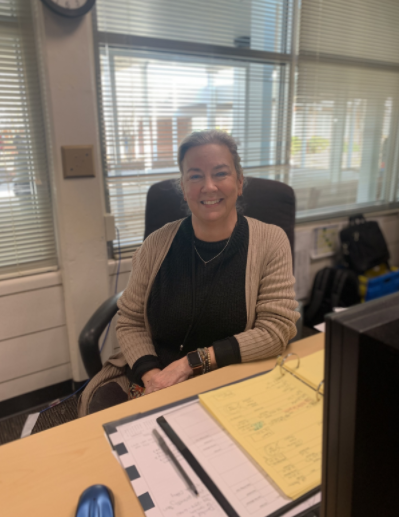 Nurse Hamilton at her desk

Nurse Tracy Hamilton will retire on December 17 from her position as Piedmont High School Nurse. Nurse Hamilton started out at the elementary school level, before moving up to work with high school students at Piedmont High School. After the winter break, we will be welcoming in a new nurse, also coming from the elementary level.
Nurse Hamilton has had many responsibilities that no one saw coming over the past few years. She had many things fall onto her plate that she most definitely was not expecting. “Everybody has been so helpful. I think we’ve all done that for each other, but I’m really going to miss that,” Hamilton said.
Nurse Hamilton said, “The community is the biggest thing that I’ve experienced and I’m going to miss that.” She has been at many schools, but said that Piedmont is the best place to be. She has grown close to the students, staff, and families of our school. Nurse Hamilton has enjoyed getting to know the many different people at our school and will cherish the bonds that she has formed during her time at Piedmont.
“It truly is a substantial loss for Piedmont High. Without Nurse Hamilton’s leadership and guidance, it would have been very difficult for Piedmont High to operate over the last two years,” said Principal Dylan Stamey.
“I’ve got several trips planned. I’m going to Aruba in January, the Bahamas in February, and me and my husband are going to Alaska,” Hamilton said about her future retirement plans. “I’m not planning on looking into doing anything for at least six months. My son got married in October and I’m hopeful that by next Christmas, I’ll have some grandchildren so then I’ll have a real reason to be at home.”
Nurse Hamilton will be replaced by Nurse Lisa Young. Nurse Young has been an elementary school nurse for six years, most recently serving Union County Public Schools at Shiloh Valley Primary School in Indian Trail. She has been thinking about moving up to the high school level because of her desire to work with older students for some time now. One of her professional goals is to serve a variety of populations. To address this goal, Nurse Young accepted the offer to take this position.
As a graduate of Piedmont High School, Nurse Young is excited to be back in Panther territory. She loves the atmosphere of the school and the attitude of our student body. “I have wanted my son to be a Piedmont Panther too!” said Young.
“The stars aligned, and I feel fortunate to be provided the opportunity to be the school nurse for Piedmont High School,” said Young in a recent conversation about her forthcoming placement.
“While she does have big shoes to fill. I have zero doubt that she will quickly acclimate to Piedmont High,” said Stamey.